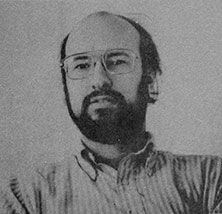 Mr. Rudolph’s art career spans 4 decades having begun in the late 1960’s at the age of 17 and extends through the late 1990’s. Lewis pursued the release of his work actively in the 1980’s but became reclusive in the early 1990’s. He studied at the Art Student League of NY with the late Vaclav Vytlacil, Marshall Glasier & Robert Beverly Hale.

There is no explaination as to why Mr. Rudolph walked away from the New York and NJ venues that had begun showing his art. I can say in the 1990’s Lewis solely cared for his bedridden mother in the home that later became his own. He devoted an exceptional amount of time to his art during that period of time.

Upon his death in 2012 his life works were found many never having been shown or framed. A retrospective of his art work is being prepared for release by his family. His abstract work was created in oil on Masonite board. Many are large works lending themselves to the Industrial Urban setting.

The abstract oils number greater than 400 works. Lewis produced abstract art pencil diaries – leaving numerous notebooks dated, and many named drawings. He has oversized charcoal drawings numbering greater than 50. Some of Lewis anatomy drawings from art school have been preserved as well as small sketchbooks he carried in his travels during the military service and his time spent in Europe.

Lewis had a “funky framing style”. He was progressive in painting on recycled material likely because he could not afford new material from early 1970- 1980’s. We have chosen to leave most of those art works in their original unique style. Only unframed massonite works have been professionally framed.