Blog 10 – Bonding with the Paintings 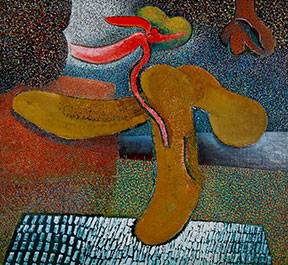 It took time for me to fall in love with the art. Is that a surprise? When Lewis and I were teenagers growing up in Red Bank NJ with our two sisters, I loved my brothers realistic painting style. Lew and I were both in high school at that time. I remember his being commissioned to paint two paintings of a scene from a local family’s vacation in Italy. He used a photo they had taken as his reference for the paintings. Lew was not a fan of being assigned what to paint. He completed those paintings at mother’s insistence. In a letter after Lewis’s death, Mr Domico wrote my sister and said the paintings still hang in their family home today.

When leaving home for the first time in 1970, I took one of Lewis’s paintings with me. It was a favorite summertime Navesink River scene. The painting hung first in my dorm room at Episcopal Hospital Nursing School, then it moved to our home in Pennsylvania where it was displayed for over forty years. I recently passed the painting on to our daughter Joy Burt for her home.

Like an undisciplined toddler, this massive amount of abstract art has had moments early on when frankly it annoyed me and was difficult to handle. The number of paintings were mind boggling. Prolific was the word Franc Palaia used to describe the number of paintings. Truthfully I simply did not understand them. They spoke a language all their own.

Physically they were heavy to move. On a winter day in New Jersey it took four of us a full day to carry each painting down flights of stairs. Some were in the basement and of course the garage was full of large paintings. After filling a 17 foot U-Haul truck we transported them , to our home, to storage, then back to our home. Bruce and I were like a comedy act transporting these huge abstract paintings from location to another location over the next few months. Forgive me Lew! But over the initial few months the paintings and I have had our moments. 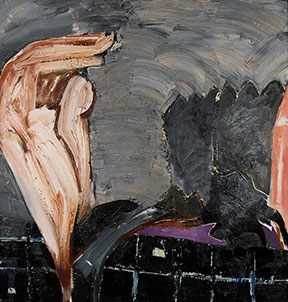 Once a plan was in place and we began preparing each individual painting the art took on a different personality. It became less of a burden, more of a mystery. Truthfully the art has become a pleasant connection to Lewis. I could even call it an adventure.

At times I have felt almost jealous when I would show someone some of the paintings and they would gush over each painting They would talk about color and emotion. I would wonder why don’t I feel it? Why don’t I see it? Even my husband Bruce was beginning to really enjoy the art.

One day I had a breakthrough in understanding a couple of the paintings. Bruce, was bonding with the paintings as he handled, cleaned and measured each painting individually during the framing process.

Bruce started to understand the emotion of some of the paintings before I did. He began to recognize and refer to each painting by name. It was easy to understand the boldness and beauty of one specific painting titled “The Fugitive Stalks” perhaps because I could visualize and sense someone hiding in grass. The stance of the being demonstrated the act of stalking. The stripes identified the central figure in the painting as a fugitive. That bold painting remains one of my favorites. I personally selected it for our first exhibit invitation postcard.

One evening Bruce finished framing painting #50 and brought it into the family room to await my wiring. I looked at it from across the room and commented ,I see a campfire … Very good Bruce said and smiled “it’s title is Camp”. I was childlike! I could see it. I could interpret this one painting. The dawning of understanding happened unexpectedly. It brought me happiness to simply get it. 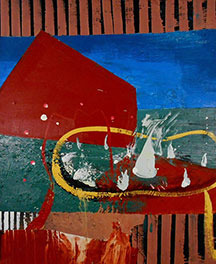 Over the past year it has become enjoyable, to really look at each painting. At times I still wonder what my quirky, sensitive brother might have meant by a painting. Some make me smile. At times I love the boldness. I confess I even named “Twister” #33 myself. Untitled, it spoke to me. It is the only untitled painting I took liberty in naming. I lie there is a second one I had to name “praise”.

I am currently reading a book on Picasso to better understand the art. I was amazed at some parallels I could draw between Lewis’s progression as an artist and Picasso. Franc Palaia gave me an Abstract Art 101 lesson by email which made sense to me.

Lewis’s paintings about love were troubling. During the house clean out I had found and destroyed several letters of love. The letters were personal and painful to read. To know Lewis had experienced lost love and shared his pain exclusively through his paintbrush saddened me. “This should be the happiest moment in my life” he wrote. He had achieved a solo exhibit at Sragow Gallery. He was robbed of joy over that accomplishment because he was in a battle of the heart. Lewis was a private person. I could not share the letters with anyone else in the family. It simply would not have been fair to him. They were too personal. I protected his privacy.

#28”Victom of Love” and #35 “Running from the Demon of Love”. His misspelling in the title perhaps share a surreal message as well. I wonder at times if the misspellings of the titles were intentional. 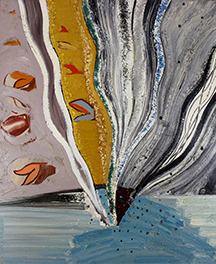 The saying, You can be close to someone and not see them…. That was myself and the art…. Now like a child I am thrilled when I see, truly see the art! I have even learned to recognize and call many of them by their name. A love bond has finally developed and flourished as I have taken on the role of guardian of the art.