Blog 11 – My Brother’s Surrealist Vision has become my Reality 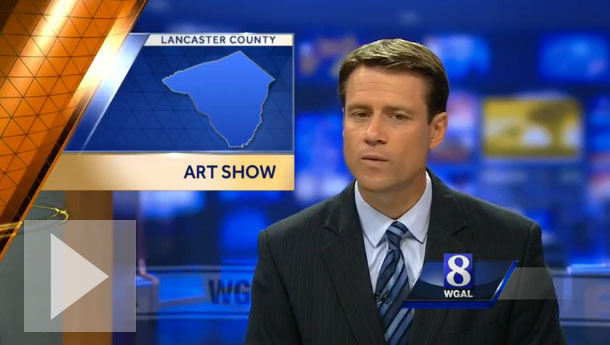 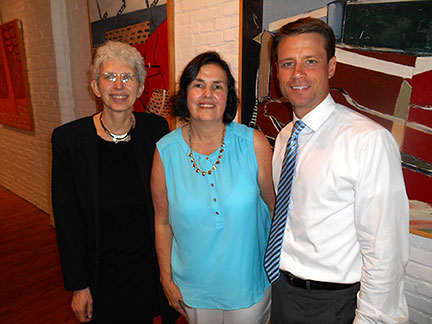 It is here! The Exhibit, My Brother’s Legacy opening at Mulberry Art Studios August 1st . Now, set up and ready for its public reveal. We often quote Lewis’s statement that he wrote about his paintings. “The paintings I paint are surrealistic visions”- today, I am living the reality of his visions.

On Sunday July 27th Bruce and I , our daughters Faith and Joy and son Peter along with their spouses and our teenage granddaughter Jada, lent muscle to moving and transporting Lewis’s paintings selected by curator/ art director April Koppenhaver to her downtown gallery on Mulberry Street in Lancaster. April’s building is a restored historic industrial space from the past that spans half a city block. We carried and positioned approximately 70 of Lewis’s abstract paintings to six 6 different gallery rooms inside the Mulberry Art facility. The tall industrial ceilings, the original brick walls and wood flooring along with expert lighting, transformed the paintings into Lewis’s world visions. Each painting can stand alone as a conversation piece, but together they are spectacular, stunning.

April personally along with one of her staff members, worked through Tuesday night until 6:15 in the morning, selecting each paintings placement, hanging the paintings, adjusting lighting, preparing each gallery to best showcase Lewis’s abstract art. April’s energy is boundless. Her commitment to her unique vision for living artists and the dreams of folks like myself, drive her passion and energy. April slept one hour, showered and was ready for the reveal during our scheduled television interview with Jere Gish. 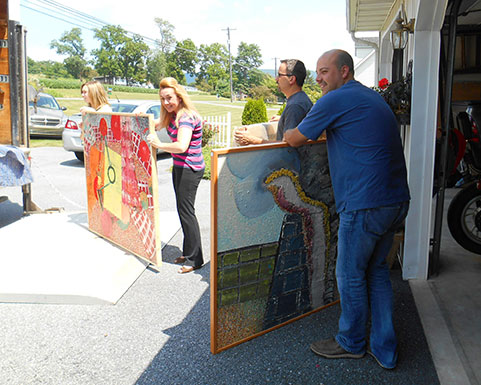 Jada, Joy, Jason and Peter ready to load paintings on the back of April’s box truck.

April and I met Jere Gish, WGAL TV news anchor and his photographer Chris at eleven in the morning for the taping of the broadcast about Lewis’s art and A Brother’s Legacy Art Exhibit opening on Friday. The interview will air Thursday July 31st 6-7 AM in the morning, possibly at noon and evening as well.

The interview experience was emotional for me personally. I did not know ahead of time what questions I would be asked. I was doing fine until Jere asked me what it was like walking into my brothers home for the first time after his death. I can see it like it was yesterday. It still makes me cry even writing about if for this blog. To see how zLewis chose to live, how he denied himself of simple comforts is a visual that I cannot forget. A visual memory that still brings tears and pain. So I lost it on film, twice…. I have a feeling that part of the tape will not end up on the editing floor.

Seeing the art displayed formally in a gallery, the popping of the colors, the beauty of it all in one place evokes emotion. The reality is that we have only about one fourth of his paintings on exhibit at the gallery. We still have paintings we have not prepared and framed . We will complete them over time. Bruce and I like the idea of allowing another gallery the experience of selecting and exhibiting never before seen paintings if they desire that opportunity.

April shared her impressions of Lewis’s paintings in her portion of the interview. To hear her critique his paintings, his style , her belief that Lewis Lanza Rudolph will someday be an internationally recognized artist, was incredible to hear again.

Since pictures tell 1000 words I will share photos to better document these past few days. The opening reception on August 1st 5 PM till 9PM is open to the public. The exhibit can also be viewed privately Monday thru Friday 10:00PM- 4:00PM at 21 Mulberry Street Lancaster, PA . I look forward to personally greeting many of you at the gallery this Friday evening.

Yesterday April, ever the encourager, said to me, “someday you and I will be flying to Paris to exhibit your brothers paintings .:” I smiled and responded “when that happens I will personally purchase your plane ticket.”

Never underestimate the dreams of a dreamer….Come on out Friday evening and view My Brothers Legacy art exhibit at Mulberry art studios and you will see my dream, my brother Lewis’s surrealistic visions both have indeed become reality.