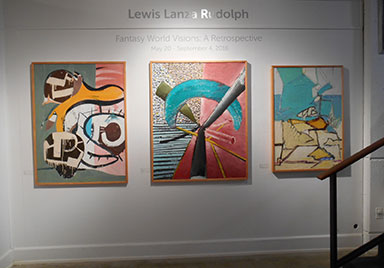 Friday evening, May 20,2016, I walked into Monmouth Museum in Lincroft NJ. There with its original boldness, under lights showcasing their bright passionate colors, was a sampling of my late brother Lewis Lanza Rudolph’s abstract paintings. Four decades of work, a retrospective art exhibit.

There was a catch in my throat as I realized the homecoming was happening for Lewis. Our hope was now reality. We had accomplished returning his paintings to his home area in Monmouth County, NJ.

From a dirt floor garage and a dusty attic his art work had been brought back to life. We had removed his paintings, from what was more a tomb than an art studio, after his passing in 2012. The appraiser had shaken his head and all but declared the paintings too far gone. 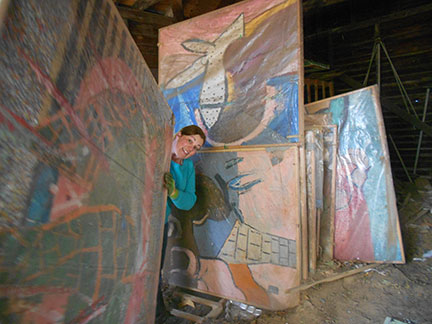 With hope, love and hard work life was breathed back into my brothers beautiful artwork and it is now back in Lewis’s hometown ready to be appreciated, ready for review.

The exhibit looks amazing! Avis Anderson and Catherine Clark, curators at Monmouth Museum, have beautifully and tastefully arranged this 61 painting sampling of my brother’s paintings. We have traveled a long four year journey to this location and we are grateful for the door they opened to display his work.

I was pleased to see our original appraiser, Mr. Peters, at the opening of Lewis’s retrospective exhibit. He had been gentle but honest when he had appraised Lewis’s paintings in October 2012. His original evaluation had been painful to hear. The road to restoring, cleaning, framing, and possibly getting anyone to take notice of the art would be long perhaps even impossible.

In December 2012, we left NJ with a 17 foot U-Haul truck filled with Lewis’s life’s work of art. Like relatives of a loved one on life support, we could not extinguish our hope. 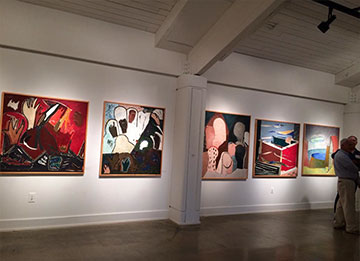 Chuck Peters, the original appraiser, accepted our invitation to the opening reception of Lewis’s retrospective art exhibit. He approached me at the exhibit, took my hand, and expressed his amazement at what we had accomplished in the past four years. He said it had broken his heart to see Lewis art stored in a dirt floor garage and a dark damp basement. But on this day, under the museum lights, the paintings had been reborn. Mr. Peters was impressed and complimentary at what he was seeing and offered some suggestions to move forward with Lewis’s paintings.

The journey is not over. I am looking for the next open door for Lewis’s paintings. Yes, I hope some will sell and find homes where they originated in Monmouth County, but seeing Lewis honored and recognized for his accomplishment in art remains the ultimate goal. We hope some of his works find their way to NJ museums. We also desire to see his paintings back in New Jersey and New York City galleries. Perhaps it sounds like a lofty goal, a bar set too high, but we are simply taking the paintings full circle to where they were before my brother Lewis walked away from his art career in the 1980’s. His work was in New York City gallery’s, and was previously viewed in New Jersey museums. Lewis has left this earth but his legacy, through his paintings, remains. I will continue the journey, for the love of my brother, yes a legacy of love. 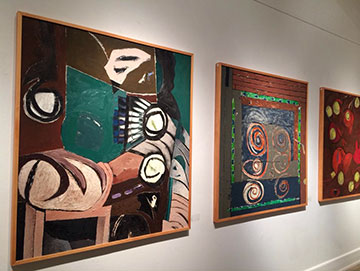 I have a 3 month open window, where my brother’s work is boldly on display, in New Jersey. Who will tell my story, Lewis’s story? I will ask, I will seek, I will knock. Through emails, letters and photos, I will do all I can for the exhibit to be seen by the public and art reviewers. I believe the paintings, in their bold bright passion, are ready to speak for themselves.

After four years of putting hope into action, the homecoming of Lewis’s artwork has become a reality.

The journey is far from over. In many ways, the journey has just begun.