Blog 7 – First Contact From the Past: Finding Franc Palaia 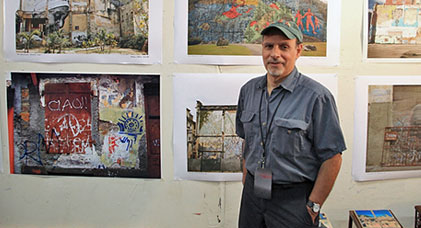 Franc in his Jersey City studio

On July 25, 2013, April and I met a third time. We confirmed plans for a retrospective art exhibit to honor Lewis titled

A Brother’s Legacy: 4 Decades of Art to be held at Mulberry Art Studio with an opening evening reception 5 PM- 9PM August 1, 2014 and a second reception Friday August 15th from 5PM- 9PM. It sounded so far in the future. Yet I knew we needed the time to prepare the paintings.

Once again, April encouraged me to make an attempt to find contacts from Lewis’s past. She suggested I begin writing other artists he shared exhibits with in the 1970’s and 1980’s.

On July 31, 2013 I found a personal note among my brother’s papers from artist Franc Palaia. Through an internet search I located Mr Palaia’s contact information.

In an email to Mr Palaia, I introduced myself. I explained that Lewis Rudolph was my brother and that he had died in October 2012. I wrote,“ I would like to return some of my brothers paintings to Red Bank New Jersey for an exhibit.” The email continued, asking for any advice he might offer, then as an afterthought I wrote, “ I guess I should ask if you even remember my brother Lewis Lanza Rudolph?”

Within minutes of hitting “send email”, Franc wrote back. Yes, he definitely remembered Lewis. In a later email Franc shared how they met and became friends. He noted they both won NJ Council of the Arts State Grants the same year. They had even exchanged artwork with each other back in the 1970’s. Franc knew my brother not only as an artist but as a friend. Franc became more than a contact over the past year, he became a mentor and friend to my husband and I.

This past year Franc has come along side Bruce and I on behalf of my brother. Like April who mentored me in preparing for our first ever exhibit, Franc became the mentor preparing me to hopefully return my brothers abstract paintings to New Jersey Art Museums.

Initially, Franc emailed me with a detailed recommendation list of how we should proceed with the paintings. Over the past year Mr Palaia has guided Bruce and I in the process of preparing Lewis artwork for copyright. He has given photographing advice plus he encouraged me to use his name as a reference on Lewis’s behalf. He explained how to prepare a presentation packet and proposal to submit to NJ Museums and Gallery’s. This past year solely through email, Franc has accompanied Bruce and I on the next leg of this journey.

To have met someone that was a friend to my reclusive brother has meant a lot to me. Franc knew Lewis as an artist. They spent hours talking art. Franc has been honoring his friendship with Lewis as he has given Bruce and I guidance. We plan to publish a catalogue representing four decades of Lewis’ s paintings. Franc has written the forward for the catalogue. With his permission I want to share Franc’s statement with you along with a photo of Mr. Palaia in his art studio in Jersey City New Jersey.

What a blessing to have Franc helping Bruce and I prepare to reintroduce Lewis’s abstract paintings to curators and directors of New Jersey Art Museums.

Franc is a high profile artist curator with an exhibit history that would fill several pages.

To have Franc Palaia come along side Bruce and I offering advice in regard to Lewis’s Post Humous “career” has been a gift to our family and most importantly an act of eternal friendship to my brother Lewis.

I first met Lewis Rudolph in the mid 1970s and became fast friends because we had many things in common. We had almost identical birthdays, both Italian American, both artists, both living in quiet seashore towns in Monmouth County, New Jersey and both starting our art careers in earnest.

From the very beginning, I became aware of Lewis’s special skill with a paintbrush. He was, already, in his early 20s, head and shoulders above run of the mill painters scrambling to exhibit their work and get attention. Even though Lewis and I had many similarities, we were the extreme opposite in how we approached the art world and community. Lewis was awkward, painfully shy and a recluse, I was outgoing, ambitious and sociable. I sympathized with his shyness and made efforts to advise him on how to navigate the very competitive and daunting art business world. I was an early mentor to Lewis and for many years on even though I did not see him very often. Despite his fear of the outside world, Lewis’s stay at home personality served him well, because it afforded him many long uninterrupted hours, days, weeks and months to hone his skill of mastering abstract painting. He seemed to have a natural instinct of how to make a perfect oil painting with complex compositions of stylish and confident brushstrokes, utilizing a multitude of rich visual textures, luscious color, animated shapes and forms that dance together on the picture plane, balanced and completely pleasing to the trained and untrained eye. He developed a painting style, although unique and all his own, that was a sly but honest and respectful blend of late Picasso, late de Kooning and lesser known Max Weber.

Lewis was, as many artists are, frugal and resourceful and could not afford expensive art supplies so he painted on any flat surface he could find. He gravitated to the hard surfaced material called Masonite which allowed him to push, pull and spackle the paint on with force and conviction without worrying that a saggy canvas was stretching or coming loose. He bought leftover house paint at $2. per gallon so he could be as prolific as he wanted to be without spending very much. This frugality was part of his charm. This carried over to his funky framing style as well. The cheap house paint, warped Masonite and rickety frames do not take away from Lewis’s impressive and accomplished body of work, consisting of several hundred paintings and drawings of which a good cross-section are on view here for the first time anywhere.

The public is fortunate that Lewis’s sister, Denise and brother-in-law, Bruce are honoring the memory of their brother with this exhibition. They have dedicated their lives with the monumental task of archiving, documenting and presenting Lewis’s paintings and drawings in a series of exhibitions planned for several states so the public can finally appreciate the dedication, stamina and brilliant artistry of Lewis Lanza Rudolph.