Blog 9 – An Action-Packed Month in the Journey

LLR > Uncategorized > Blog 9 – An Action-Packed Month in the Journey 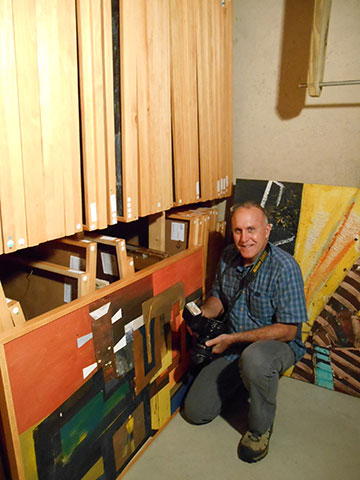 What an emotional month. The Opening of our exhibit at Mulberry Art Studios A Brothers Legacy 4 Decades of Art is poised to open in about a one month.

I have had the thought that the exhibit will be set up and no one will come visit. Will there be enough publicity? Life has taught me that sometimes we simply have to ask, seek and knock. Isn’t that what I did the day I walked down gallery row in Lancaster over one year ago?

Recently, I wrote emails to two newspapers with no response . No assurance the email was even read. I did a google search “How to submit a story to Channel 8 WGAL TV”. Following the instructions I found online I wrote an email about my journey with Lewis’s art to Jere Gish a reporter with WGAL.

How surprised was I when the phone rang and it was Jere Gish himself offering me an interview. He thanked ME for contacting him about my experience. I assure you my thanksgiving to WGAL is greater. A TV interview showcasing some of Lewis’s abstract paintings at Mulberry Art Studios is scheduled the week before the opening reception. How thrilled am I?

Asking worked once so I called Lancaster News and asked for the feature editor. How kind was Mr Castle who checked out our website, connected me to reporter PJ Reilly and photographer Dan Marschka. I have to confess, ever since doing the phone interview I had felt sick to my stomach.

I wondered would Mr. Reilly portray the story with Lewis as the Headliner rather than focusing on my journey? Yes I am on the journey of sharing Lewis’s art, attempting to see him recognized for his accomplishments in abstract art. But it is Lewis who is the heart of the story. Lewis needs to be the headline.

A few days after the interview Dan Marschka Photographer for the Lancaster News came and did a photo shoot with the art. Dan showed such enthusiasm about Lewis’s art. He became instantly connected to the art. He truly seemed to enjoy the photo shoot with the art. It may sound strange but it was important to Dan that he capture the arts emotion. Dan took his time focusing attention and care with lighting. Dan would remark when he loved a painting. He was so encouraging to work with around the paintings.

Photographing the art with Dan was a pleasant experience. Yes of course he photographed me as well and I took HIS photo for this blog.

Another reason June was so special, our invitation postcards for the August exhibit with “A Fugitive Stalks” featured were picked up from the printer. Mike at Cornerstone Graphics Technologies in Ephrata did a phenomenal job. He turned our job around in short order.

As if all the above was not exciting enough, the same week Avis Anderson, director curator of Monmouth Museum in Lincroft NJ telephoned me. She is hoping to attend Lewis’s Mulberry Art Studios exhibit. To walk through the exhibit with her would be so meaningful to me personally. It has been my hope, my goal, to see Lewis’s paintings return to NJ for a retrospective exhibit in their place of origin. Ms Anderson has agreed to discuss that possibility with her decision board. No Promises.

As an added bonus to that phone call, Avis Anderson said she remembered Lewis. As soon as she saw his photograph on the website she remembered him. It was so delightful to share a conversation with someone who knew Lewis as an artist. I asked if she knew why my brother walked away from exhibiting his art? That remains a mystery. Her explanation was that some artists simply do not enjoy that aspect of their career in art. But she did not personally have a conversation with Lewis on the topic in the past.

What an emotional month of firsts. I was concerned where my journey would lead after the month of August. I know this is a slow process and I am on board for the longer scenic route. I have had to do a lot of asking, seeking and knocking this month to get word out about the art exhibit. I am grateful for those who said yes and offered the opportunity to share our story A Brother’s Legacy 4 Decades of Art through multi media. My experience has been to those who ask, seek and knock, the door indeed will be opened.